A review of the 2012 Annual DC FOIA Report shows that delays occurred in one-third of all FOIA responses — more than 900 in total. For requesters challenging an agency’s deicision, appeals decision 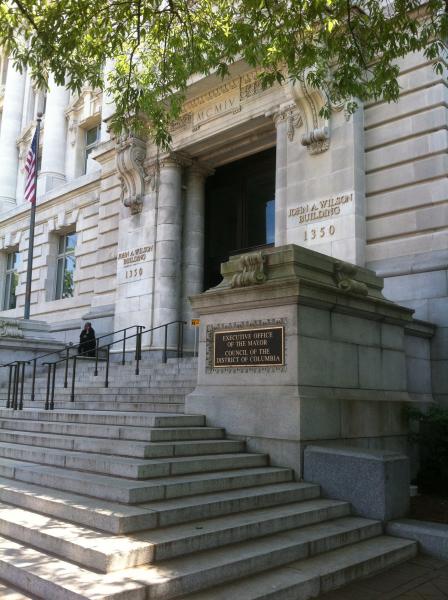 s found the agency’s action incorrect nearly half the time. Most stunning is that attorney fees skyrocketed to more than 10 times amounts in previous years. The 2012 FOIA statistics underscore the importance of making FOIA reform a priority in the District.

A review of the 2012 Annual DC FOIA Report shows that delays occurred in one-third of all FOIA responses — more than 900 in total. For requesters challenging an agency’s deicision, appeals decision

s found the agency’s action incorrect nearly half the time. Most stunning is that attorney fees skyrocketed to more than 10 times amounts in previous years. The 2012 FOIA statistics underscore the importance of making FOIA reform a priority in the District.

In 2012, District agencies, led by the Metropolitan Police Department, denied in full nearly 8 percent of records requests made under the D.C. Freedom of Information Act (FOIA).

This rate is higher than in 2011, the first year of the Gray administration (Mayor Vincent Gray took office in January 2011), when the denial rate was 6 percent, but a significant improvement from the 9-12 percent denial rates in the administration of Mayor Adrian Fenty, 2007-2010.

The agencies most frequently cited individual privacy rights as the reason for denial.

Agencies in 2012 answered more than 6,000 requests, the highest number in recent years. They finished the year with an unanswered backlog of just fewer than 200 requests, comparable to recent end-of-year backlogs and again a significant improvement from backlogs that peaked in 2009 at more than twice as many.

DC agencies released all or part of the requested files in about 73 percent of requests, roughly comparable to the 69-77 percent rate of the past five years.

A sizable fraction, 617 requests or 11 percent, were reported as “other disposition.” This rationale is applied in cases where agencies found “no records responsive to the FOIA request,” said Donald Kaufman, an attorney in the Mayor’s General Counsel’s office. This could be, for example, a request for traffic camera footage on a certain date, but a search showed that date was beyond the usual retention period. Approximately 400 additional requests were withdrawn or sent elsewhere.

More than one-third of requests were processed beyond the 15 business days allowed by law, and half of those took 26 days or more.  The 63 percent on-time figure was the worst performance in all the years of both the Gray and Fenty administrations.

Three agencies accounted for two-thirds of the denials in 2012. Just one, the Metropolitan Police Department, issued half of all the denials in D.C. Government, 238 of 471. The Office of the Inspector General and Department of Motor Vehicles (DMV) contributed another 17 percent of the total (about 40 denials each).  Each of the three had the most denials in 2011 as well.

The Inspector General’s office and the DMV also had the highest rates of rejection, 56 and 51 percent, respectively.  The MPD rejected one of every five requests received, as in the previous year.  Both OIG and DMV more than doubled their rejection rate, from about 20 percent in 2011.

The most common reason cited to withhold information was the privacy exemption, Exemption 2, which was applied in 37 percent of denials. Exemption 2 protects from release information of a personal nature whose release would be a clearly unwarranted invasion of privacy. Agencies also frequently invoked Exemption 3, which applies to law enforcement investigative records, particularly when information might cause an unwarranted invasion of privacy or disclose secret investigative techniques. That exemption was cited in 32 percent of denials. Exemption 4, which protects internal agency records related to decision-making and the “deliberative process” was invoked in 19 percent of denials.

In 2012, agencies cited both the general privacy and deliberative process exemptions about 7 percent of the time more often than in 2011. However, they cited the exemption for law enforcement investigations less frequently, down 4 percent from 2011.

FOIA requests in 2012 were concentrated, with four agencies receiving half of all requests:

The D.C. FOIA, at § 2-538 (4), also requires the Mayor to report on numbers and results of appeals of agency denials. On appeal, if the Mayor’s action “results in a denial of information,” such as when the Mayor affirms an agency claim of exemption, the statute requires the Mayor to cite “the reason for the action;” however, that information does not appear in the annual report.

In 2012, the Mayor’s Office of General Counsel decided 85 appeals and the results showed the agencies were wrong more often than right.

Appeals of denial can challenge a variety of agency responses to FOIA requests and the annual report does not categorize them (for example, delay, insufficient search, or claim of exemption) nor does it show whether appeals challenged the full decision or part of the decision. Additionally, not all adverse actions can be appealed. For example, the Mayor refuses to hear appeals of agency decisions denying requests for reduced fees.

The Mayor’s office reversed agency decisions in full or in part for almost half of all appeals. The 44 percent figure is a significant increase from the 27 percent rate of reversals in 2011 and the 10 percent rate in 2010. By contrast, the Mayor upheld agency action in 38 percent of appeals. The remainder were typically dismissed as moot, often because the agency took further action after the appeal.

The District defended 45 cases brought by requesters challenging agency actions in D.C. Superior Court in 2012. Additionally, four Superior Court FOIA decisions were pending on appeal in the D.C. Court of Appeals. This rate of nearly 50 cases both in 2011 and 2012 is a major increase from just three years prior — 2009 saw only 17 reported lawsuits.

The Fraternal Order of Police (FOP), the union that represents the interests of police officers, was the most frequent 2012 plaintiff, filing 29 lawsuits — 64 percent of the cases. Other litigants were mostly local editors and writers along with several public interest groups. No major press organizations filed FOIA lawsuits in 2012.

The most frequent defendant-agency was the Metropolitan Police Department (MPD) — not surprising given the number of FOP lawsuits. MPD was challenged in 30 of the 45 cases; all but three were brought by the FOP.  Only two other agencies were sued more than once, the Department of Corrections and the Deputy Mayor for Planning and Economic Development were each sued twice.

These patterns are longstanding, as the FOP has for years brought about 60 percent of all D.C. FOIA cases (52 of 89 new matters in the three prior years), and the MPD has been the agency most often sued (48 of the 89 cases, all but six by the FOP).

The District has been notably unsuccessful in court, losing 16 of 20 cases of those decided in 2012 and negotiating settlements in two others. Prevailing plaintiffs included the FOP in 11 cases, three public interest groups, a freelancer, a community newspaper and an individual citizen activist. The one appeal decision affirmed the District’s denial of attorney fees in a case where the FOP prevailed. D.C. lost 11 of 14 cases decided in 2011 and 3 of 4 decided cases in 2010.

The District was assessed $379,000 in court costs and attorney fees in 2012. Three awards comprised the bulk of the fees: $190,000, $97,000 and $75,000 were awarded to two public interest groups and one individual requester; they had successfully sued to overturn FOIA decisions by the MPD, Department of Corrections and the Deputy Mayor for Planning and Economic Development. The FOP collected $15,826 in 2012 fee awards.

In the case decided in 2012 that involved $190,000 in attorney fees, the court criticized the District’s approach, saying “let the word go out that no D.C. attorney is to do what you did in this case.” That case[2]  concerned MPD records and spanned three years, involving multiple claims of blanket exemptions. MPD officials signed affidavits that entire records were exempt and that disclosure of any information within the records would be harmful. The court said the MPD statements were “transparently false” and government attorneys’ reliance on such false documents “undermine[d] every argument” to the court. The court indicated frustration at reviewing stacks of records because of the government’s blanket reliance on the affidavits and counsel from the D.C. Office of Attorney General acknowledged that “my filings advocating the department’s positions have brought shame on my office.”

Analysis in this report was conducted on behalf of the D.C. Open Government Coalition by Fritz Mulhauser, a D.C. attorney and member of the Coalition’s board of directors.

[1] D.C. Code § 2-538 directs the Mayor each year to collect specific data from each public body on requests received and processed under DC FOIA in the prior fiscal year. The D.C. Secretary does no public analysis but compiles the reports into one summary table and several agency-by-agency spreadsheets that are sent to the Council annually by February 1. Eight years (2005 to 2012) of the summary reports to the Council are on the web site of the Office of the Secretary. However, they are difficult to locate. From that site, search for “annual reports.”  Agency submissions are available for all but two of the past eight years, in the form of a large spreadsheet. The statute requires a summary statement and conclusions from each agency about compliance with the law but those are inconsistently provided and are typically very brief. The statute, D.C. Code § 2-538(c), also requires the Attorney General to report annually to the Council on litigation arising under the statute, the exemptions involved, the cases’ dispositions and any costs assessed. We obtained the report for 2012 by a special request as it is not posted on the Office of the Secretary web page.  Previous Attorney General reports are online with the other required annual FOIA reports.